Journey On Becoming A Mountaineer & The Olympic Mountain Project 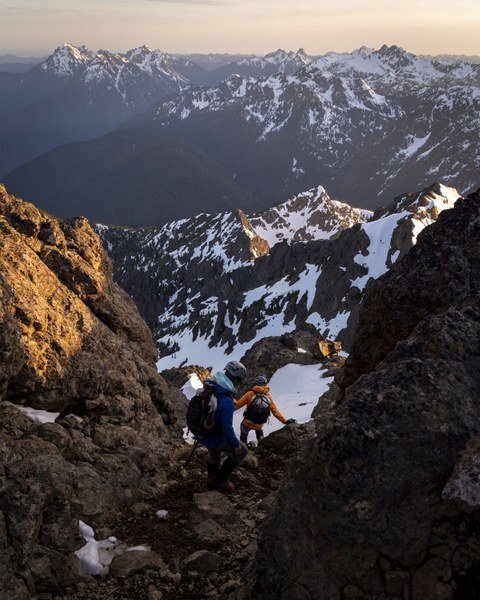 “For a guy who grew up in corn fields the concept of the mountains was definitely something I wanted to discover myself."

Despite being a mountaineer Nate Brown didn’t grow up near the mountains in fact he grew up in Maryville Illinois! This is Nate’s story and journey into becoming a mountaineer and finding his true calling.

Nate Brown grew up in the very flat American Midwest but got interested in the mountains through outdoor photography he looked at online.

Nate Brown says, “Illinois is super flat, so when I came to Seattle in 2014, I saw the mountains and thought I needed to climb that. But, even before I came I was already interested in seeing photos of them. I had minimal outdoor training in boy scouts as a kid, I had that foundation of knowing how to be out in nature. So, for the mountains I started hiking and I joined a club called the mountaineers that’s based in Seattle, I enrolled in a class and got into a basic alpine climbing class. They teach you everything like backcountry navigation!” Says Brown.

With the skills he had learned it had started a passion. I talked with Nate about a project he started called the Olympic Mountain Project, you can hear the passion in his voice as he explains how he got started.

“It started around 2014 or 2015 I started working on my endurance and hiking, that brought me into the technical side of mountaineering, I started photography. I got asked a few times by my close friends what I was working towards. Honestly at the time I had no idea, so I thought I need to have some sort of goal, I started planning it. I looked at huge parts of the Olympics, a little over 200 peaks. I researched it and what was involved in climbing it. I started ruling out peaks, until I brought it down to 30. There wasn’t a particular reason why I chose it but after doing those 30 peaks I can say I’ve seen every part of the Olympic Mountains,” said Brown.

Before COVID hit his plans were to climb every peak within three years but as Nate Brown says, “my plans came to a screeching halt.”

A screeching halt indeed, but Nate Brown remains hopeful of the 30 summits he so desperately wants to climb! His beautiful photography on his website “natebbrown.com” not only shows his journey as a mountaineer but the most beautiful mountain ranges. Never again will I take the mountains for granted, as I look at my window I am reminded each day of the beauty, while Nate is being reminded of the many summits he has climbed and hopes to climb. As I speak with him, he shares some of the summits he’s conquered as a midwesterner! Some of the peaks he summited include Mount Henderson at 6,003 feet with an elevation gain of 11,876 feet. Sentinel peak which is 6,592 feet with an elevation gain of 6,276 feet. As well as a 360 degree mountain view when you reach the top according to natebbrown.com.

He made me laugh when he said, the worst part about climbing a mountain is when you have to go back down it!

I could see how determined he was in his goals when he told me he had taught himself to ski.

“I taught myself how to ski at a local ski resort, so I can climb it and ski down, said Brown."

Being an army veteran Nate brown shares the best advice he was taught in the army and why mountaineering is so much more mental than you may think!

"For anyone who’s ever climbed a mountain its 30% physical and 70% mental. Your body can do a lot more than what your mind gives you credit for. I think being in the army is a component they teach you by pushing through and coming out the other side.”

Nate Brown says “Embrace the suck!” As he talks about going up the mountain and how exhausted you are as you climb. Snow is probably sticking to your jacket and freezing your hands. You can feel the smile form across his face when he says, "But, when you get to that summit it’s all worth it!"